The survey is now closed. Thank you for sharing your feedback with us!

Welcome to the online open house for the Smokey Point Boulevard Corridor Project!

The City of Arlington wants to hear from you! We want your feedback about Smokey Point Boulevard to better plan for future growth and development along this corridor.

These improvements will support future growth and help create a community corridor for small businesses and residents.

You can use this site to:

The City of Arlington is expecting major growth in Smokey Point

The City of Arlington needs your help planning for growth in the Smokey Point area. The City and and the Puget Sound Regional Council (PSRC) have been working over the last few years to plan for this growth. In June 2019, PSRC designated the Cascade Industrial Center in Arlington and Marysville as Snohomish County’s second manufacturing industrial center. This designation prioritizes federal transportation funding through PSRC.

By 2040, the Puget Sound Regional Council predicts that the Cascade Industrial Center will add approximately 20,000 more family-wage jobs in Arlington, with over half of that job growth occurring in Arlington. This will be a dramatic increase from the 8,000 jobs that currently exist in the area. The Cascade Industrial Center is located just outside of the Smokey Point Boulevard Corridor Improvements Project area and we want your help envisioning a better corridor to support this upcoming growth.

Snohomish County is the second fastest growing county in the nation. Some of that growth is expected to happend in the City of Arlington. The population is expected to grow by 7,000 residents in the next 20 years, which will require an additional 3,000 residential units to be built. Snohomish County does not allow Arlington's urban growth boundary to expand, which means that there will be a need for higher density housing in the future. City staff and the council are committed to accomodating growth and not changing the character of the city and have adopted a set of mixed use development regulations to plan for this new growth. Please visit the Planning & Land Use Division's webpage to learn more about this effort.

The city will design a new Smokey Point Boulevard to support safety for all modes of travel as the corridor experiences increased use.

We want to hear from you about how you currently travel along Smokey Point Boulevard and where you would like to see improvements. Based on your feedback, the team will develop some preliminary designs that will help achieve our goals of creating a better corridor for all users.

What do the corridor improvements aim to do?

The corridor improvements seek to enhance safety and develop a community corridor on Smokey Point Boulevard by:

The project will have multiple benefits for the community, including:

Improve access to and use of the corridor for drivers, transit users, pedestrians and bikers

Increase safety for all users, including pedestrians and bicyclists that may use Smokey Point Boulevard in the future

In September 2021, Community Transit released their 2021-2026 Transit Development Plan (TDP). The TDP outlines Community Transit’s goals for 2021-2026, which includes planning for the new Swift Gold Line that will operate between Smokey Point Transit Center and Everett Station. A scoping study is planned to begin in 2022.

Interested in learning more about Community Transit’s plans? Visit their website to learn more about the TDP and their Swift bus service.

The City has developed some renderings to help show you what Smokey Point Boulevard could look like in the future!

Please note that these renderings are only to be used as references for what Smokey Point Boulevard could look like. Currently, there are no plans to implement or construct these designs.

Do you have ideas for what you want Smokey Point Boulevard to look like? Share your feedback with us using the project map or by filling out the survey!

These renderings are for illustrative purposes only and are meant to serve as visual representations of what Smokey Point Boulevard could potentially look like once the project is completed.

Between November 2021 and December 31, 2021 the project team gathered feedback from the community through a survey and project corridor map. We are currently evaluating the results and will share a summary of the responses later this year. Please visit us again in the coming weeks to learn about what we learned and any other upcoming outreach opportunities.

The city and the design team will take your feedback into consideration as they continue developing conceptual designs. We will follow up with you in early 2022 with more project information and another opportunity for feedback.

The planning and design phase for the project will continue through 2023. This project is funded by the City of Arlington and a federal grant. 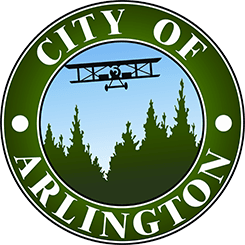 You have signed up for email updates!